In 2016, just 3 years ago, I legged it from work one Friday afternoon [losing my wallet in the process] to watch Middlesex win the County Championship, Division One.

But for Middlesex – the wheels have fallen off since then.

Middlesex are rock bottom of the division two table.

We have just recovered, in rather epic fashion against Derbyshire, who scored 557/6 declared in one-and-a-half days, with two of their batsmen getting tons, while others scored 96, 99 and 92.

Thanks to a supreme Dawid Malan 199, the game ended in a draw. But at the end of Day two, when I began writing, it certainly felt very familiar. Teetering on the brink.

But in many ways, that Malan rearguard sums up Middlesex at the moment. Very much down, but with glimpses of hope.

I’ll begin with the sense of impending doom at the beginning of the season, when I made the decision not to renew my membership.

Membership isn’t cheap. £265. I looked at the fixtures list, and Lord’s championship games’ starting days didn’t fill me with hope.

There was 2 games starting on each a Monday and on Tuesday, with no playing days on the weekend.

In other words, membership would be worthless as I could literally have gone to maximum two days (and I wouldn’t have gone two days in a row, anyway).

Even when the club changed it, so that two fixtures were to start on a Sunday, it was hardly a hook to get me in.

While this was disappointing, I am fully aware this has been a World Cup and Ashes year, and I’d hope these fixtures are changed for next year, so all hope isn’t lost, quite yet.

The other problem with Middlesex, is the lack of performance in recent years.

In the T20 last year, they packed out Lord’s each week, but lost 12/14 games, with poor tactics and average overseas players in Ashton Agar and Dwayne Bravo.

The T20 blast hasn’t begun yet but given the fact they had a good run in the Royal London One Day Cup, coming second in the South Group, it would be fair to say things are looking up.

It helped that they showed more ambition, bringing in Ross Taylor for the RLODC, and signing of Ab de Villiers for the shortest form.

When it comes to the Championship, it’s perhaps the case that numbers can be deceiving.

Last year, Middlesex finished fourth, with more wins than the team above us. Yet in 14 games, we had just 4 tons, and the top batsman averaged just 35.

This year, we may be bottom, but Middlesex has already got 6 tons, including three from David Malan.

There is Test match experience at the top, with Paul Stirling, Sam Robson, Malan, and when he returns from ODI duty; Eoin Morgan, too.

Although we’ve won just 1 out of 8 Championship games so far, we’ve also had 5 draws, owing in part to the weather.

Middlesex has only lost one game, and Durham, who are two places above Middlesex, have lost double the number of games.

With just 10 points between Middlesex and Worcestershire in sixth, there’s no reason to give up this season, quite yet; especially with in form batsmen.

All-in-All, there is a lot to worry about, but also in both the short and long term, scope for realistic improvement.

Perhaps I’m a hopeless optimist, but while the county is clearly not in the best shape – it’s no time to hit the panic button.

There is potential to climb up the table, and build a new squad for next year with some of the older players moving on.

While Middlesex must do better in the second half of the season – the direction for the future in the longer term is positive. 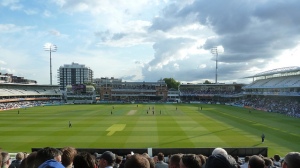 It seems like a very long time ago that I watched Middlesex win the Twenty 20 cup back in 2008. It’s about time Middlesex pulled our socks up a little in this format, because last year was abysmal.

The FLT20 this year is a little bit like a strategic time out, which of course is one of the newest fads in cricket, brought in by the IPL. It was introduced to allow some sponsoring and advertising air time, of course, but on field it also allows the fielding side to regroup, break the concentration of the batsmen, and to bring a wicket or a change in attitude.

The next Championship game is on the 8th July, which is nearly three whole weeks away. It’s some time to reflect upon a slight dip in form, so I’d like to think that Middlesex are using a strategic time out, in the form of limited overs cricket. That isn’t to say that the FlT20 is less important and is a breather for the championship, but that it is going allows the side to take our mind off it, and have a different mind-set, against different teams, a different set up, and perhaps importantly, it is a fresh start. It is a chance to set down the standard, and then have another pop at the LVCC a bit later.

The YB40 is not going as swimmingly as Middlesex may have hoped. After being beaten in a rain affected game versus Yorkshire, Middlesex are now precariously at five out seven in the group, although they have a game in hand. In terms of points, it is still do-able, with the top two on 11, and Glamorgan and Leicestershire on nine and eight points. Then again one would assume that at this point, the focus turned back to the County championship, and of course the T20. The YB40 is slowly falling through our hands a bit.

The season not fallen in to disrepute by any stretch of the imagination, yet it is unbelievably frustrating to be a fan of Middlesex sometimes. It all looked set to be a really great season, winning the first three games. But, after having stumbled in recent weeks, falling from the top two to fourth as a result of not registering a win in the last three LVCC matches, doubts are seeping in as Middlesex are languishing mid table.

The 10 wicket loss to Yorkshire and the draw versus Sussex, a game in which Sussex were made to follow on no less, were particularly exasperating. It was a chance to bridge the gap at the top, and instead Middlesex fell down the table. Having said this, there has been an encouraging resurgence in our limited overs form, and one can only hope that more limited overs cricket will help the consolidation of this form, and this can be carried forward.

Dawid Malan in particular, has been in abysmal form in the Championship (114 runs in eight innings with no fifties or hundreds)  but has returned to form in the YB40. He has struck four impressive scores of 99, 80 not out, 96 and 49, before his 14 against Yorkshire. He is perhaps the middle order in a nutshell. Clearly in good YB40 form, of sorts, but needs to carry this over.

There is really no speakable problems with the bowling attack. The wickets are regularly shared across the attack, although perhaps the greater number of fixtures from YB40, has affected selection. This is perhaps most importantly where the FLT20 is acting as a strategic time out. It is definitely a format in which the team sheet is not just photocopied, but there are specific picks for the format. This could give players a rest, and potentially even allow others a chance to break through.

The fact of the matter is that Middlesex have shown that the batting is consistently the problem. The top two have been in strong form but the middle has not. Both Eoin Morgan and Adam Voges will be in the middle order, and Paul Stirling is likely to also play who was the leading run scorer in the competition last year for Middlesex and is coming  fresh from impressive form versus Australia A and Pakistan.

This FLT20 is certainly going to allow an injection of aggressive batting with Voges, Morgan, Stirling, and an in form Malan, hopefully. If the North London club can harness potential good form in the FLT20 and bring that form into the championship, it could be a rejuvenated and salvaged season.