What we have seen from England in the last six to eight months displays what can only be seen as the final frontier of England’s cricketing ambitions finally being taken by the scruff of the neck and wrestled. That is One day cricket. England are improving and have had in them instilled some kind of method of playing One day cricket that has helped them to win. Big runs and quality bowlers. Not to mention the exceptional standards in fielding.

Last year when England played Sri Lanka with the tri captaincy formula we saw the dawning of a new light. Alistair Cook in one day cricket ? Surely not. Well it’s true. And it has worked a treat. He scored a hundred in the fourth one dayer and it was one of those tons for me that i watched and thought something feels a bit different. I think they key factor to why i thought this is that there was such a great balance of attack and defense. A good balance also between bat and ball in the side. England had depth but class, not depleting either bat or ball by playing a few all rounders which in the past have meant a team of Darren Sammy’s i.e. not good enough with either bat or ball really.

As of the last few months England are now on a five game winning streak. Within this thet have consistently had top order runs. When Alistair Cook brought up his fantastic hundred yesterday; it was the 6th consecutive occasion in which an english opener had scored a ton. Does that tell you something ? Yes. England have found a formular of attack (Pietersen previously but now bell, and defense, Cook and trott.)

Here are the 6 innings

I know Kevin Pietersen has now retired and will not be playing ODI cricket but it looks as if Ian Bell is a perfect replacement. His 125 at the rose bowl was a brilliant attacking fluent and stylish innings. It is exactly what England have been looking for at the top of the order. He is a technically brilliant batsmen and gives England a mix of stability and  slightly more attacking option than Cook yet slightly less than Pietersen.

I am not claiming that after 6 good innings England have solved a problem they have always had. All i am saying is there is a renewed attitude towards the game. There is a deliberate sense of class and attacking intent. Sometimes aggression at the start. The Batsmen know the plan and there is a confidence in their techniques. Cook who was for a year or so very scratchy has had a phenomenal year or so and has reasserted himself once more as a quality player with his one day form.  Before 2011 the entire outlook was always a bit frantic and disorganized.

Englands top three have been firing and haven’t necessarily given the middle order a good run really. Trott has a few 40’s and Morgan and Bopara have a few fifties but essentially it has been all the top two or three. But England now also have a serious depth. With the openers getting a platform even if they do not get a hundred, the likes of Trott, Morgan, Bopara, Kieswetter, Bairstow Patel or whoever England decide to play will have enough of a springboard to accelerate. There are the likes of James Taylor, Bairstow, Buttler, Compton and Patel all vying for a spot also.

This could be the difference between mediocracy and the best in the world. Think about it. We used to get an England side with one or two fifties and a few 30’s and 25’s that led England to get 250 odd. Now we have some century makers  and some really attacking players that come in down the order. England bat down to 9 and 10 even with Swann, Bresnan and Broad being able to hit a long ball. We have a lot of people that can score up and down the order and people that could come into the side and fill a spot. England just need to decide once and for all who they are going to chose because indecision could create a lack of conviction.

England must carry on though. If they want to be the best they need more and bigger hundreds and to keep up the pressure with the ball

What is a good team though ? Just a strong batting unit ?? NO.

England have not just hit big totals and ground down the opposition but have blasted them away. At the Oval they were playing Broad, Bresnan, Anderson Finn and Swann. They rarely even use the 50 overs allocated because they have so many runs on the board and the bowlers are such high class they can get the opposition out before they have the chance to bat out 50 over. Not forgetting also that England have the likes of Dernbach, Onions, Tremlett, Woakes, Tredwell, Meaker etc waiting in the wings. They have serious depth on and off the pitch and all of them are mid 20’s with only Anderson and Swann over 30.

Hunting in a pack

Whilst the batsmen have been notching up tons, a strange phenomenon has occurred with the bowlers. In those six games above mentioned in which there have been 6 tons by openers, there has not been a single 5 wicket hall. In each occasion the wickets have been spread with bowlers like Bresnan getting 4 wicket halls at the Rose bowl the other day, Dernbach getting 4 in Dubai at the 4th One dayer, Finn four wickets in the second and first one dayers. When each bowler is getting wickets it means there is constant pressure. NO WEAK LINK. England don’t need a Brett Lee or Lasith Malinga as a strike bowler as they constantly take wickets. 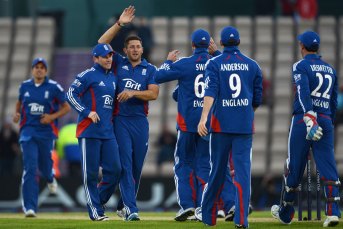 Its apparent that England have a string of reliable top order batsmen i.e. Cook, Bell, Trott. They have a solid middle order capable of rebuilding or accelerating with the likes of Morgan, Bopara, Kieswetter, Bairstow, Bresnan etc.. and they have one of the best crops of fast bowlers in the world with the likes of Anderson, Broad, Finn, Dernbach, Bresnan, Onions etc.. and let us not forget that England have a highly ranked spinner also. Graeme Swann is a brilliant bowler to have to get the quality players out like Chris Gayle out. He often helps to build up some serious pressure whilst others feed off the lack of runs and get a share of the wickets.

Yesterday Chris Gayle hit 5 sixes within a period of 11 balls. Hitting Bresnan onto the roof and down the ground twice. It was Swann that eventually got him out for 50 odd. However, of late i think it would be fair to say England don’t lose track of the game as much as they used to. Even if someone like Gayle goes on a rampage, they will just get through it. Shortly after Gayle they were taking wickets but this is done through pressure of the likes of Swann and Broad. Regular wickets from every bowler means no weak links. England had Broad on in the middle overs. What team can have that amount of depth to bring on the 7th best bowler in the world to bowl in the middle overs ? England have never looked so good. 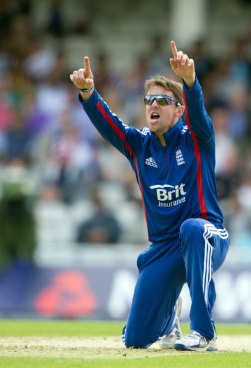 Whereas England have a brilliant spinner, arguably their one remaining real glaring issue is against spin. The likes of Ajmal, Vettori, Herath and other such quality spinners have always proved hard to play against. England need to learn to play a turning ball a lot better and hopefully having Swann in the side will help them do that. The fact in that if they are getting top order runs agaisnt the new ball the quality spinner in the side can only bowl 10 overs. Play that out.  This may however merely be England’s problems on the sub continent. If they can get over that it could be a lot easier.

England have a brilliant mix of top quality batting, aggressive intent, efficiency in the bowling and a taste for winning. I see this is as the start if a period of dominance and hope that England can build on success in Test and T20 to develop and prosper. The main problem i fear is that England’s middle order is not getting enough practice, and they are so dominated by success in English conditions that they may struggle in places like India or Sri Lanka. What we saw in Dubai and Abu Dabi reassured me a little but not hugely.

We need to try and win in India outright (not in a wc situation.) Losing 6-1 hurt. We need to beat them ozziesss as well.. that also really hurt.